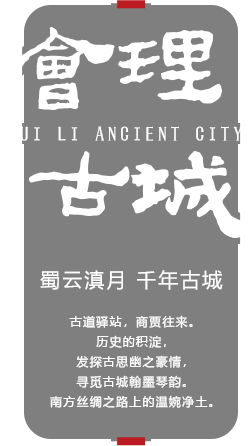 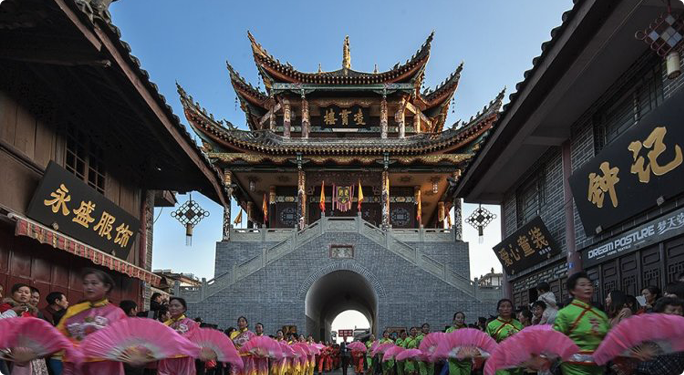 Thousand years old city, happiness Huili. Huili ancient city is a national famous historical and cultural city, and also one of the most intact ancient cities on the Southern Silk Road.
With the bell and Drum Tower as the center, it extends out four main streets in the East, South, West and North. South and North streets mainly focus on commerce, East and west streets mainly focus on catering, and the three streets of Dongguan, Xiguan and Beiguan with the north gate as the center are the seven main streets in the ancient city. South Street to Beiguan is three li three in length and seven meters in width. The whole ancient city forms a chessboard pattern of "Three Li and three li through the city, nine Li and nine Li around the city" and "four streets, three passes and twenty-three lanes" centered on the North-South central axis.
With a little attention, you will find that the space of the whole ancient city is orderly, with clear primary and secondary functions. In the west of the city, there are cultural buildings such as academic department, Confucian temple and park; In the north of the city, the alleys where craftsmen gather are the center, and most of them are inns, handicraft workshops, horse shops and so on; There is a money making Bureau in the south of the city, where most bank operators live. There are seven streets in the city, along which are shops; In the alleys of the city, there are squire houses and courtyards; In the northwest region, there are many large buildings, such as government offices, Taoist temples, theatres and squares.
There are more than 20 well preserved alleys in the ancient city, paved with stone slabs and winding paths. On both sides of the lane, most of them are residential courtyards built in the Ming and Qing Dynasties. They open a small door at will, passing through hundreds of years in an instant, with a unique artistic conception. The architectural style is a mixture of North and south, and every family is full of flowers and leaves. Enjoy it slowly and savor it carefully. Just think it's the Qing Dynasty Folk House Museum in China. It's free to visit.
When you come to Huili, you don't have to rush to see the ancient buildings. First, you have to deal with the Huili people. Their ancient sense of dealing with people and things is the living soul of this ancient city. To be able to manage people's life, up to now, they have not been disturbed by the outside world too much. They live a comfortable and leisurely life. People who come to travel may as well relax their heart slowly first, so as to sink into the unique atmosphere and breath of Huili and experience her beauty with heart. Maybe, in this small town, you will find your hometown which has been lost for a long time. Since the Yuan Dynasty, Huili built a city with loess, and the site is the "outer city" of Huili today. In 1398, the inner city was built with bricks and stones, and a drum tower was built on the north gate. In 1632, three towers were built in the East, the South and the west to build a complete defense system. In 1756, the bell and Drum Tower, the landmark building of Huili ancient city, was completed. In the fifth year of tongzhi (1866) of the Qing Dynasty, the outer city and the three passes of East, West and North were built, which laid the foundation for today's Huili ancient city.

"Huili" is located at the intersection of Sichuan and Yunnan. It is a inhabited place of ethnic minorities. The special geographical location of "key to Sichuan and Yunnan" has laid the multicultural characteristics of the blending of Sichuan and Yunnan customs and the interaction between Han culture and ethnic minority culture.
The unique customs of "medicinal food", "medicine market" and "visiting all kinds of diseases" in the Dragon Boat Festival;
Xiaoheifu Baisha village, the "hometown of Chinese folk culture and art", has unique folk customs such as Yi song and dance, trumpet, dragon sacrifice and chaff screening; Xin'an, the only Dai Nationality Town in the province, is famous for its water splashing Festival and Gayang dance.
In the old lane of Huili ancient city, you can see the micro architecture with white walls and tiles, the square layout of the northern quadrangle, and even the Central Plains Style ancient theater... The famous copper hot pot is clearly from the north. You can occasionally hear common expressions in Nanjing dialect when talking to people who will be in charge. Among the ancestors of Huili people, there were Kublai Khan's descendants, Shanxi merchants and Huizhou merchants who came to Huili to do business, immigrants from Huguang to fill Sichuan, and soldiers brought by Zhu Yuanzhang's ministry from Nanjing. Because of the military settlement policy, many of them married local Yi girls and stayed here. In Huili, more than 20 ethnic groups live and work in peace and contentment, most of them are good at singing and dancing. When you go to the North Gate Square at night, you can often hear the original couplets, and young people hand in hand and tirelessly dance the trampling dance... They are not performing, that's their life.
In Huili, tradition still lives brilliantly in reality. Dragon Boat Festival in addition to eating zongzi, there are herbal fragrance all over the city. On the 24th of June of the lunar calendar, the torch node of the Yi people is burning all over the mountains. In October of the lunar calendar, we celebrate the year of the dancers, singing and dancing, and eating for three days. The traditional culture of Huili has lasted for a long time. Confucian academies, Buddhist temples, cangsheng palace and Catholic Church have survived to this day. From the Spring Festival couplets of ordinary people or the plaques of small shops on the street, you can find the profound accumulation of traditional culture. When dealing with people, you can feel an increasingly rare simplicity and kindness. It's rare elsewhere, but that's what the Chinese used to be.
In addition to the rich humanities, the landscape of Huili is also very attractive. 4. In May, I went to longelbow mountain to see cuckoos. It doesn't matter if you miss the season, there are clouds and Buddha light. In winter, the magnificent snow scenery is amazing. Xianren lake is very close to the city. You can understand the red culture of Huili. Then go to jiaopingdu, where the Hengduan Mountains are magnificent. The Jinsha river separates Yunnan and Sichuan, where the Red Army entered Sichuan from Yunnan. In Huili in May, there are red pomegranate flowers all over the mountains. In September, it's the best time to go to copper mine village and pick pomegranates by hand, which may be the most delicious pomegranate in the world.
Experience Huili, enjoy Huili, from now on!